Our range covers vintage, classic and modern day vehicles. We sell brand new and factory remanufactured units, our inventory is constantly being renewed, updated and expanded in range to meet our customer’s needs. Our specialist knowledge and first class customer service have resulted in us being a leading supplier to customers around the world.  We offer next day delivery in the UK, with efficient low cost courier services to all the countries of the world using our courier partners.

If you have a rare or hard to find starter motor or alternator, please contact us, our speciality is finding parts other suppliers will not be interested in. If we cannot offer a replacement, we alternatively offer a factory repair.

Some of the technical detail of our products are shown below: 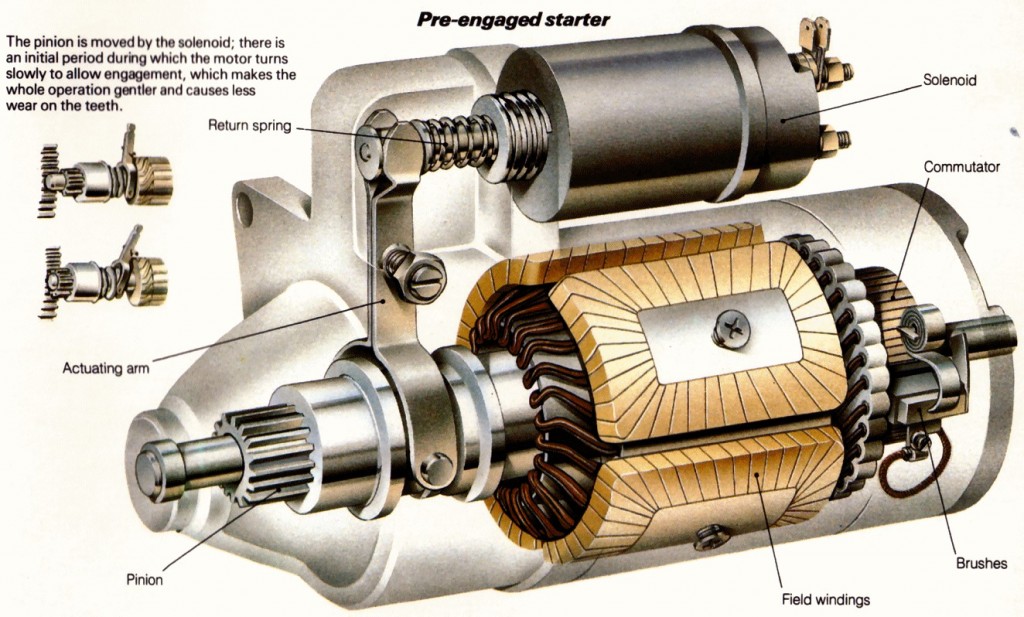 A starter motor operates as follows:

The combination of the rotation of the starter motor and the engagement of the pinion to the engine flywheel means that the starting process is complete.

When the engine starts the operator releases the ignition switch and current is no longer supplied to the starter motor allowing the solenoid to retract such that the pinion moves away from the starter ring gear and the starter becomes inoperative.

When examining a starter motor please look for the following signs which are an indication that the starter motor may be burnt out:

If the starter motor is showing signs of any of the above there is a vehicle fault which needs rectifying before fitment of a replacement starter motor, failure to do so will result in premature failure of the replacement unit. Excessive Dust Damaged teeth Discoloured Pinion/Shaft Oil type substance in nose cone. Discolouration of label. Broken brush holder wire.

Component parts of a Starter Motor are as follows:

The armature is mounted on the drive shaft and bearings for support. It is a laminated soft iron core which is wrapped with numerous conductor loops or windings. The commutator is a section of the drive shaft at the rear of the housing on which the brushes conduct electricity. Electrical current flowing through the windings and the commutator bars creates a magnetic field which causes the armature to rotate.

The solenoid contains two coils of wire that are wrapped around a moveable core. The solenoid acts as a switch to close the electrical connection and connects the starter motor to the vehicle battery. The process allows the solenoid to push forward the plunger connected to the actuating arm (lever fork) which engages the pinion.

The pinion is a special combination of a gear and springs. Once the starter is engaged the gear is extended into the gearbox housing and is engaged with the starter ring gear attached to the engine flywheel. This spins the engine to start the engine combustion process. 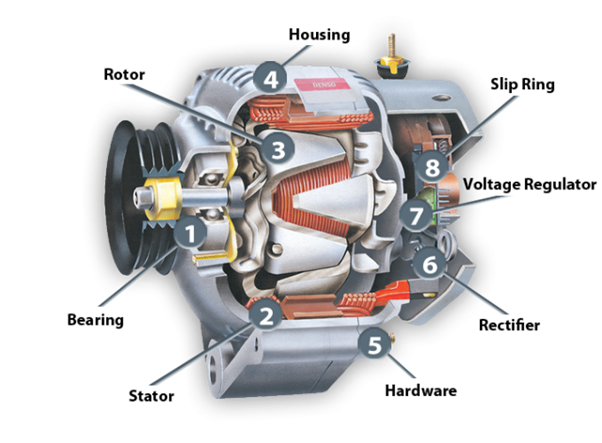 An Alternator operates in conjunction with the vehicle battery to supply power when the vehicle is running. The output of an alternator is direct current (DC). When the alternator pulley is rotated when the engine is running alternating current (AC) passes through a magnetic field, the electrical current generated is converted to DC current via a rectifier.  The current is controlled by a voltage regulator in order to cope with variable electrical vehicle loads.

Advances in technology have driven changes in alternators from the early types which were externally regulated to more sophisticated CANBUS controlled alternators. The early type of externally regulated alternator were only used to generate current which was then controlled by an external voltage regulator, these were replaced by a built in regulator with a warning light circuit in the 1990’s using the warning light to energise the alternator and start the charging process.

As vehicles evolved and installed electrical systems started to become more complex, a digital field regulator was introduced. This regulator would monitor data between the alternator and the vehicle ECU regarding the charge rate.  Many vehicles have adopted a load request charging system with smart charge systems and CANBUS systems. As the vehicle demands more electrical load the ECU sends a signal to the alternator requesting it to start charging. The alternator has to cope with variable electrical loads and adjust its charge rate accordingly. Some of the later vehicles are now fitted with an overrunning pulley rather than a conventional fitted pulley, the overrunning pulley helps synchronise the drive belt system to improve efficiency and reduce noise, harshness and vibration. As the engine speed slows down the drive belt can slip, the advantage of an overrunning pulley (OAD DE-Coupler Pulley) is that the clutch mechanism within the pulley reduces the speed in a more controlled manner reducing the slippage, the main advantages of this system are:

Component parts of an Alternator are as follows:

The voltage regulator controls the level of power distributed from the alternator to the vehicle battery in order to control the charging process. Regulators vary in design performing different functions and work depending on specification.

The rectifier is used to convert current from AC to DC during the charging process.

The rotor is a rotating shaft inside the alternator rotating via the pulley and drive belt system, the rotor acts as a spinning electromagnet and is supplied power via the slip rings and brushes.

Stator consists of wire coils wound through an iron ring, which sits outside the rotor, when a magnetic field is produced the electrical current is created.

The bearings are designed to support the loads of the pulley and rotation of the rotor shaft.

The pulley is connected to the rotor shaft and the engine drive belt system, engine rotation turns the pulley initiating the charging process.
» Back to Homepage» Contact Us